Summer is winding down here.

Usually I don't like August. There is just something about it. (And I'm not a fan of February, either.) But this year, I didn't seem to mind August so much.

August is a time of endings and beginnings. Transitions. And the creature of habit that I am does not like transitions. The creature prefers schedules.

But transitions are important. They are how we move from one thing to the next. Always during transitions I have to make time to reflect or I will lose my mind. I need to see what I'm leaving. I need to envision where I am going. As a teacher, August is the perfect time for this.

So, in my writing life, this past year has been busy. 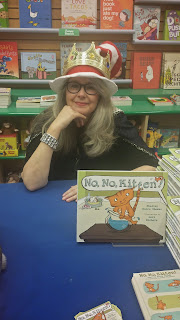 NO, NO, KITTEN came out in March. Such a fun and silly book, and the first one I ever dedicated to someone other than my family. (This one went to the kids of Jefferson Elementary, my school). Working with the folks at Boyds Mills was awesome. And you should see what is coming from them (and me) in 2016!  It's about dragons, except that there are none in the book. None at all. That's why the book is called THIS BOOK IS NOT ABOUT DRAGONS. I've seen a little art for it and guys, it is so funny.

I wrote another picture book (or two) but I will have to tell you about those later.  Spring was a very picturebook write-y time for me.

SECRETS OF SELKIE BAY came out in July. I haven't ever had two books come out in a single year before. It makes things a little crazy. It's kind of like having twins or two very young toddlers while you are carrying a third child, (or in this case, book). They both needed lots of my attention. (But I kind of pretended that SECRETS OF SELKIE BAY didn't come out yet, at least to myself. I am planning a launch in September (more info soon) and will be releasing the trailer soon, so.....I know. Weird.)

But during all of this, I was busy writing. I finished a very difficult revision on a sci-fi book I've been working on for a bit. I really love it, but it needed a lot of patching together. As a matter of fact, I saved it in a file I called FRANKENSTEIN because I felt like I was always stitching it back together, trying to jolt it into life. I've got a little more I still want to do to it, but it is coming along.

I revised a chapter book that I love. Chapter books are a hard sell, but that didn't stop me from writing it and loving it, so that's all I can say about that. We shall see about the rest.

And because I am a crazy writer, and it was summer, I started a new project. I had been toying with an idea that had a little of this: I have no idea what the final shape of this story will be. It is...strange. It is already 32k, which is not too bad. I would like to finish it before August 31, but it might need a few more words after that.

When I finish, I will set it aside for a bit and tweak the sci-fi a little more.

Hmmm. This is a weird reflection. I thought I'd be focusing more on endings and beginnings, but everything seems to be running together in a much more fluid manner. I finish one thing, only to go back to another. Very circular. Much like the hare coin above.

But I do have a few Fall goals:

And of course finish (and revise) weirdo novel that does not even have a name (or genre!!) yet. Well, actually it does have a genre, but if I say too much, it will disappear into the mist.

hrh
Posted by storyqueen at 6:00 PM

It looks like this when it is relaxing on the beach, in case you were wondering:

On Starships and Dragonwings (a sci-fi fantasy blog)

If your blog reviewed Secrets of Selkie Bay and I didn't include it, let me know and I'll link it!  (I know there are a few more out there...I just couldn't find the links...?) And if you wanted to review Secrets of Selkie Bay but didn't get a review copy, email me at Storyqueen@gmail.com and I'll see what I can do.

From the bottom of my heart, I want to thank the people that read books and take the time to write reviews of them. It is truly a labor of love--as much as it is to write a book in the first place. (Except that authors usually get paid and book bloggers do not. So yes, writing about a book is truly a work of the heart.)

Posted by storyqueen at 4:53 PM No comments: