It's been almost two months since The Seven Tales of Trinket came out.

To be perfectly honest, I did not expect it to feel so weird, having this book out into the world.  I thought it would feel kind of like when my other books were released.  Lots of happy feelings and all.

Maybe it's because this book is so much longer than anything I've ever written, or maybe it's because it contains a good deal of my soul, but whatever the reason, the first week after the book launched, I just felt....shy.

And all I could tweet about or blog about was the book, because that was stuff that people already knew.  I couldn't put anything new out there into cyberspace because so much of me was already out there.  And it felt so, so strange.  I mean, I was excited for people to finally be reading my story, especially kids, but at the same time, I just felt very Open and Odd.  And Awkward, too.

It is scary, having so much of your heart out in the world.  And I wasn't afraid of people hating it or anything--that's their prerogative--it is more just that it felt strange to have people knowing the truths I held in my heart.

So, amidst all of these strange and awkward feelings, I find myself trying to work on another book, for what is a writer but one who writes.  And the going is rough.

But there is magic in the world, folks. And the great thing about magic is that it comes upon you when you least expect it. I got a package in the mail, all wrapped in tye-dyed duct tape and inside was this: 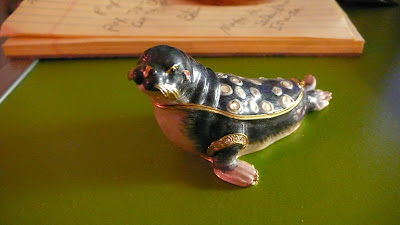 It is a hinged seal-box.  And it was the most perfect gift I could have received.  My current story deals with Celtic selkie legends (shape-shifting seals).  What a beautiful and awesome trinket!  And what an amazing way for a friend to reach out and touch another friend, even if they had no idea that the friend was struggling with strange and unusual feelings. (Because this is all kid of weird to be talking about.)

So, thank you, Myrna, for making me feel less alone.  And thanks to all of you who have read Trinket and let her into your hearts.  I am so proud of how everything turned out, even if it feels as if I am broadcasting to the world all of my secrets between the covers of this little book.

Signs That It's Almost Halloween

1. A real-live ginormous spider has moved into my tree and I can't even put that fake cottony spider-web stuff out there because his webs are even scarier and he sits in the middle of them.......waiting.

3.  Already overdosed on candy-corn and can't bear to look at any candy at all.  (Except, I would eat Dots. I can always eat Dots.)

4. Recently terrified 120 5th graders with the Legend of Sleepy Hollow. (Although I have yet to tell The Ghost With One Black Eye.  Luckily there are still a few more days.)

5. Listened to my first Christmas Carol of the year.  Wait. WHAT???   Well, that's how I know that it's almost Halloween--when I start getting ready for Christmas.  Only so many hours in the day.

But the crispness of Fall is finally in the air here in SoCal and I am ready Halloween.  Bring it on.

Signs of Halloween in your neighborhood?

Yeah, well, what do you do when your life gets incredibly busy and hectic?

At the Thomas house, whenever things seem extremely crazed, bordering on out-of-control, we like to add another element into the mix, you know, just to spice things up.

His name is Henry.  It was going to be Harry, because I loved the irony of Harry/Hairy because that's what Springer Spaniels do--they leave HAIR everywhere.  But the look on his little face was just so wise.  He looked like a "Henry".  That is the name that stuck. (Plus, my daughters refuse to give their dog a "dog" name.  He must have a people name.)

In other news, I will be at the California Reading Association Conference on Saturday, signing books from 11:00 until around 2:00 at the Yellow Book Road booth.  It is held this year at the Town and Country Hotel   in San Diego.  If you happen to be there, stop by!  I'll have bookmarks and also discussion guides for THE SEVEN TALES OF TRINKET that are aligned with the Common Core Standards for FREE!

And Then There Were Three...Stars That Is!

THE SEVEN TALES OF TRINKET just got her third star, this time from Booklist:


[starred review] The Seven Tales of Trinket.
Thomas, Shelley Moore (Author)
Sep 2012. 384 p. Farrar, hardcover, $16.99. (9780374367459).
Alone after her mother’s death, 11-year-old Trinket decides to follow in the footsteps of her father, a
traveling bard who left when she was six years old and never returned to his family. Trinket, who longs to
become a teller of tales as well, sets off with her loyal friend Thomas in hopes of reuniting with her father.
Along the way, they find hardship and trouble as well as friendship and magic. Relying on their wits, they
face cruel, powerful foes, including a banshee, a ghost, and the faerie queen. Readers may guess Trinket’s
father’s identity before he appears on the page, but that will not diminish the tension when their
problematic meetings leave her with conflicting emotions and a difficult choice of endings. The novel is
structured as seven tales Trinket tells of her adventures on the road. Each ends with a song. In the
appended notes, Thomas discusses the roots of the stories, which were inspired mainly by Celtic folklore.
A storyteller as well as the writer of Good Night, Good Knight (2000) and its sequels, Thomas offers an
impressive debut novel in which she weaves seven compelling stories together with narrative power and
considerable grace.
— Carolyn Phelan

And then this happened (if you don't want to click the link, I'll just tell you that Trinket is on the amazing Anderson's Bookstore's Mock Newbery list.  Seriously, I am so awestruck.  And pleased, too.)

But the best thing is a boy came up to me the other day who said, "Mrs. Thomas, I finished your book!!"

Me:  "What was your favorite part?"

Boy:  But you should have written more.  I mean, there could be more of the story....


I suppose there is always more of the story!  But the best part of being a children's author is having kids interact with your book, and then with you.  It's just, well, magical.

I've got a big, fat, truthful post brewing, but little time to write it.  Hopefully soon, before it just explodes out of me.

What is going on with this weather?  Really.  I mean, it is now OCTOBER!!  Can I have an occasional cool breeze or something?

I am so ready for it to feel like Fall.

I want to wear sweaters.

I want to NOT have the play the Chipmunk version of Party Rock Anthem so that my students will dance raise the temperature the requisite one more degree needed for the A/C to kick on.

I want to run through leaves that crunch under my feet.

I want to wake up to Fog and Mist.

I want to wear my new BOOTS!!

I want to smell the wonderful fragrance of fireplaces in the brisk evening air.

I want to eat a marshmallow toasted on  Autumn bonfire.

I want to make soup and apple crisp.

My goodness, am I whiny tonight or what?  Chalk it up to the lovely cold I am nursing.  Having a cold in the heat is kind of cruddy, in case you were wondering.

And I want to write something good.  My well has been fairly dry as of late--second guessing every word I put down on the page.  Is this good enough?  Does it reek of trying too hard?  And the minutes that I am able to scrap together are choppy at best, as are the words that fill them.   I have convinced myself that if it only really felt like Fall, everything would be better.  Better food.  Better smells.  Better writing.

So bring on the Fall!

Favorite signs of Fall, anyone?
Posted by storyqueen at 8:11 PM 7 comments: