In honor of one of my favorite holidays, St. Patrick's Day, I am pleased to present to you the cover of SECRETS OF SELKIE BAY (July 7, 2015)

Yay!! Now I don't have to have the fake cover thing anymore!! Or the COVER TO BE REVEALED thing. Yay!!

Here's the description of Secrets of Selkie Bay:

In their present-day tourist trap of an Irish seaside town, famed for its supposed involvement with selkies in the past, three sisters are faced with the sudden disappearance of their mother. Crushed by the loss, their father is struggling to carry on. To make matters worse, there are rumors afloat in the village that their mother herself is a selkie who has now shed her human form and gone back to sea. As Cordie Sullivan, the oldest daughter, tries to learn more about her mother's vanishing, she must find the strength to help her family move ahead, even as she discovers an increasing number of clues that point to a hidden island off the coast--a mythical kingdom of the selkies.

And you can click HERE to read the first review from a librarian.

This story is so close to my heart. Now I'm off to make corned beef hash, which might be the best way to eat corned beef ever.

This week really began before this week began, if that makes any sense. You see, a couple of weeks ago, I went up to Long Beach for the the Southern California Independent Bookseller's Children's Literacy Day to give away free copies of NO, NO, KITTEN!
It was so much fun, giving away copies of my little book to SoCal indies. Then a very cool thing happened. I met Maureen Palacios from Once Upon a Time bookstore in Montrose. She'd brought several of my books from her store for me to sign. Then she told me about how GOOD NIGHT, GOOD KNIGHT was the book that her daughters took to school to read in front of their classes All By Themselves. And she told me how her husband, who was just learning to read in English back then, used to read GNGK with her daughters (who are in college now!!)

Wow. Those are the stories that mean the world to an author. The world.


On Monday, some of the teachers helped me bring No, No, Kitten!   into the world via performance. It was pretty hilarious because really, I had no idea what the kitten and puppy were actually going to do at any given  moment.

And on Tuesday, the Carlsbad Library hosted me for Read Across America.


On Wednesday, my friend Mr. Schu premiered the No, No, Kitten! trailer on his blog (which was made by my amazing illustrator, Lori Nichols!!!) on his blog. Here is a link.


And then on Thursday, the Official Launch at Barnes and Noble: 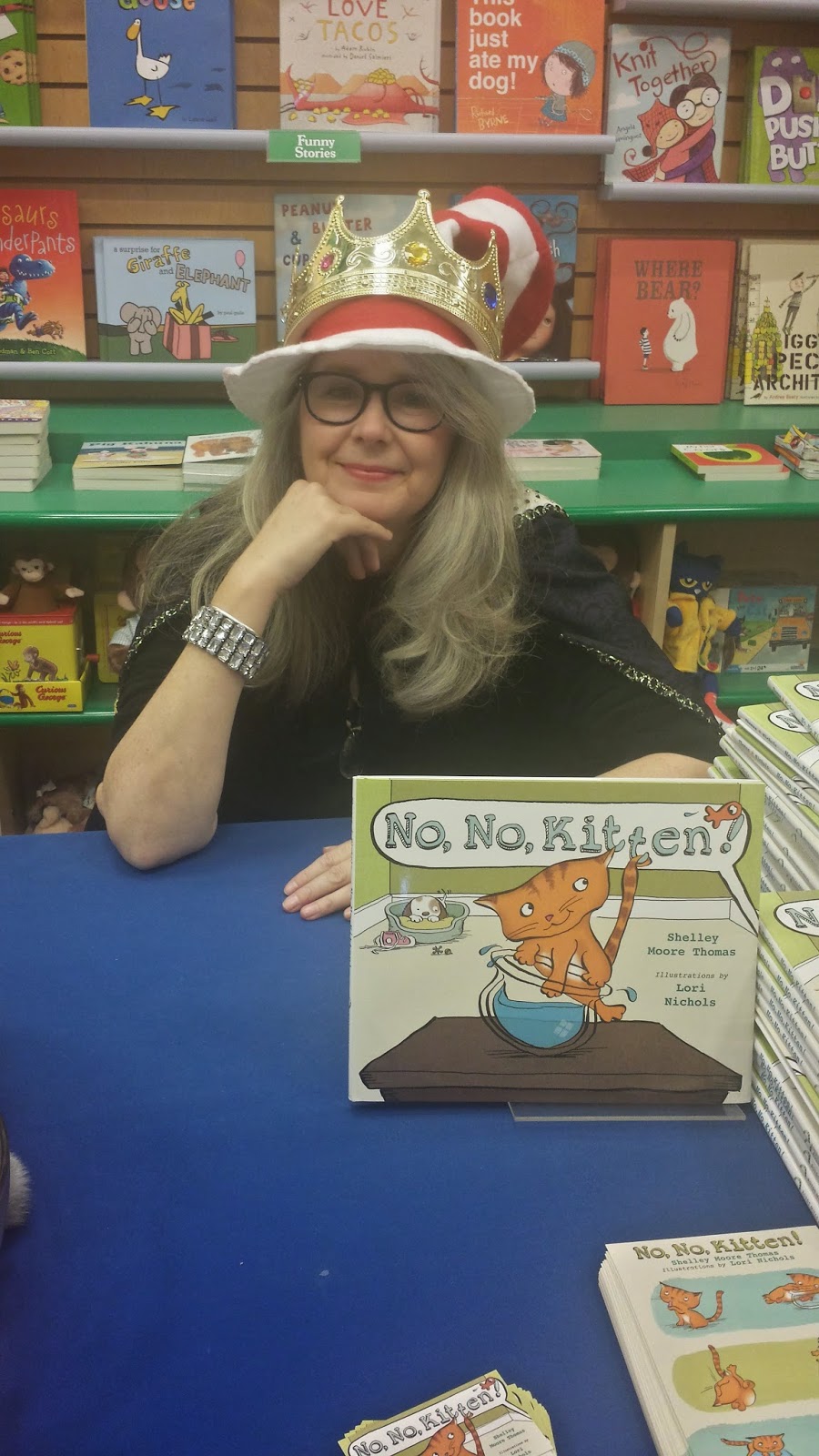 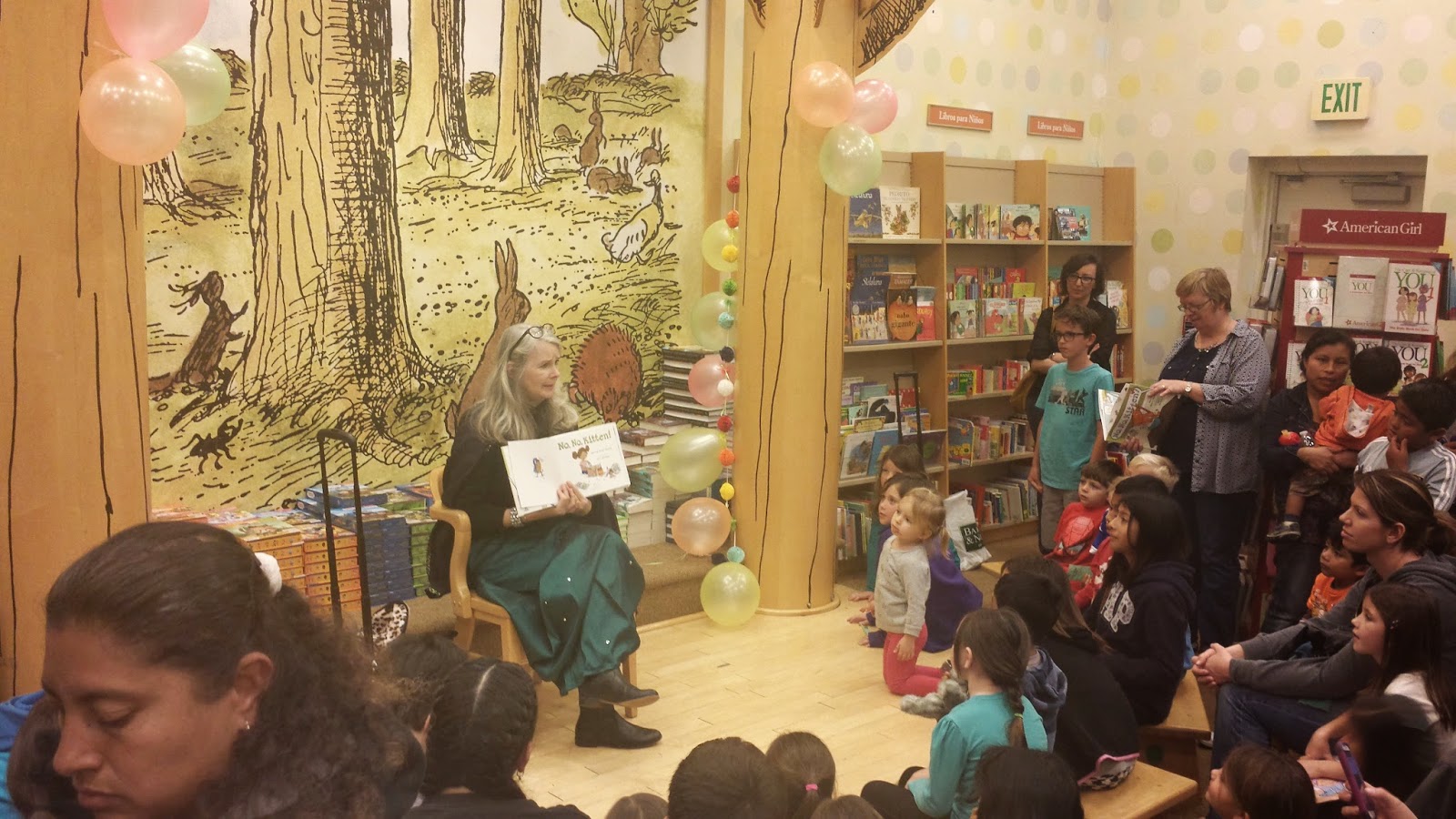 And then one of my students DID write a book called:

So this was a pretty awesome week. Very exciting and exhausting. I'll leave you with this:

Getting Ready to Launch the Baby

This week is going to be busy!

Monday- Assembly at Jefferson Elementary School to kick off Read Across America. My staff will be performing NO, NO, KITTEN!  It goes without saying that high-jinks will ensue.

Tuesday-Celebrate release day with my class by doing fun things.

Read Across America at the Cole Library, 3:30 pm. I will be reading NO, NO, KITTEN! and helping kids find books to check out. There will be snacks and crafts, too!

Thursday-Official launch of NO, NO, KITTEN! at 6:00 p.m. There will be crafts and you can eat a Kit-Kat with Kitten! (But not Kit-Kats as cool as these. I mean, I WISH!

By Friday, I hope I am still standing. Seriously. (And next week, there is more!!!)

I can't wait for you to meet Kitten!