May Goals and Such

I don't even think I posted at the beginning of the month what my writing goals were.  I might have even forgot to make any.  Bad author.  Bad.  But such is the way of things somehow.  This has definitely been the month of stolen moments for writing.  Half an hour here, fifteen minutes there, and the occasional huge chunk of time that leaves me wondering exactly how to fill it with the words my story desperately needs.

The book in question is the one I wrote about selkies.  I have been struggling internally with the direction I want the story to go.  Originally, I had a vision of it, then I wrote it and let the story go where it wanted, but I am haunted by that first vision.  And I really want to try and make that happen.  Because the long and short of it is that I want this story to be beautiful.  I want it to be beautifully imagined.

Thus, I have been mired in struggle, but I've kind of liked it.  Strange to admit, but I am so attached to this story that the work of making it better, of making it "right" just makes me feel...good.

So, onward I write.

But just to prove how strange life is sometimes, here are some highs and lows of the week:

High:  I found out (via internet) that a little girl named her pet worm "Orla" after reading THE SEVEN TALES OF TRINKET and falling in love with that character. I can't tell you why this made me happy, but it did.

Low:  One of my students used his creative writing time in class to create multiple choice questions.  This hit me harder than I want to admit.  I know we just had state testing, but still.  STILL.

High:  Trinket made the BANK STREET COLLEGE BEST BOOKS 2013 LIST with a designation of Outstanding Merit.  The rocks my socks because when I was in college studying education, Bank Street was "where it was at" in terms of educational research and doing what was best for children. I am hugely honored.

High:  STAR TREK did not disappoint.  All I can say is that for the first time, I am totally excited about the proposed new STAR WARS movies.  We are in good hands with JJ Abrams.

Any writing highs or lows--or ups and down of general life?

What's Been Going On

I blinked and then it was May.  Just like that.

I am trying to slow down and enjoy moments this Spring, but instead it's more like diggings my heels into the ground and attempting to skid to a stop while being pulled by a rope attached to a crazy bull.

It's not that effective.

But it's quiet here on this Sunday morning so I can take a sip of tea and be a bit reflective before everyone wakes up and the roller coaster starts up again.

1. At the end of April, I found out that THE SEVEN TALES OF TRINKET was a finalist for the California Book Award.  I was blown away and very honored.  The gold medal ended up going to THE ONE AND ONLY IVAN, which I could not complain about because, well, IVAN was awesome.

2.  My team of teachers just won an "Outstanding Education Program" award for that cow eyeball dissection lab we organized. The award includes funding so that we can continue the project next year.

3.  I have two graduations looming (eighth grade and college), which begs the question, how does one make fajitas for fifty people without losing one's mind?

4. I've been thinking about writing more than I have been writing.  This has not necessarily been a bad thing.  Since I am in the midst of reworking a chunk of a middle grade book, I kind of feel like I am laying each word down, brick by brick, ever-so-slowly, so that they don't topple over.  I know the weight that they need to hold up, I know the pattern they must make so that the structure will be sound and stable. It is a gift that the only deadline I am under to make it work is self-imposed.

5.  Everyone keeps asking me what I am doing or where I am going this summer, but I don't want to really go anywhere or do much of anything. What I really want are huge blocks of unstructured time. Here's hoping.


So, there's life as I know it.  How are you getting yourself ready for Summer?

When I was a kid, one of my favorite things to do was to watch reruns of Star Trek* (the original) with my dad.  Sometimes we would stay up late, waiting for a special episode to came on after the ten o'clock news, sometimes we'd find one broadcast on a Saturday afternoon, but regardless of when, for that hour I was a TV zombie.  I couldn't take my eyes from the screen.

And naturally, I daydreamed about it all later.

Except, I always had a small problem with the whole Star Trek mythology.  Well, maybe not so small.

You see, I never identified with the female characters.

Now, don't misunderstand, I liked Uhura.  And I thought being a communications officer on a starship could actually be a fun job.  But seriously, she never got an adequate amount of screen time nor an acceptable amount of adventure. As for Nurse Chappell, well, she kind of annoyed me, so I didn't want to be her.

And then there was some lady with blond basket-weave hair that was on from time to time, but I can't even remember her name...Janice? Maybe?  I am going to google blond basket weave hair lady from Star Trek and see what comes up.  Give  me a moment.

Seriously she wasn't on that often, and if you wanted to go adventuring across galaxies, then that hair would take way too much upkeep.  (Remember, these were my thoughts as a ten year-old...and I was not far off the mark!)

See, if you wanted to go "where no one** was gone before" then the character you HAD to be was Captain Kirk.  I loved him.  Not in a "I have a crush on you" kind of way, but in an "I want to be you" kind of way.  I mean, he always seemed like he had a plan, even when he didn't.  And he lived for adventure.

(I didn't pick up in his jerky womanizer tendencies as a kid. I suppose that made him a flawed, multi-dimensional character, who knows? Regardless, I am glad my dad didn't tell me I should be identifying with basket weave head. She didn't  get to do much of ANYTHING!)

But oh, the adventurous Kirk!! 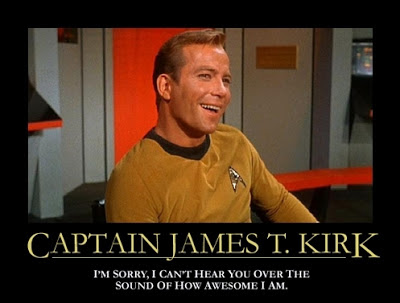 This need for adventure has influenced my stories greatly.  My characters need to go somewhere, do something within their tales for me to be able to follow their stories to the end.  Every one of my characters has a teeny bit of James T. Kirk living inside of them.   (However, NONE OF THEM ARE JERKY WOMANIZERS!)

Yes, I am dying for the next Star Trek movie, in case you were wondering.

Is there a childhood show or book that influence your writing?

*I always had to explain to my friends that it was Star TREK, not Star TRACK.  Sheesh.  Didn't their dads stay up late to watch it with them?

**Yeah, yeah, I know, on the old series he always said, "Where no MAN has gone before."  So glad when they changed it for NEXT GENERATION.  I'll have to post another time with all of my love for Captain Picard!!  Love you, Jean-Luc!!
Posted by storyqueen at 4:06 PM 3 comments:

What I've Been Reading

Confession: Sometimes I am afraid to read books that tell you How to Write in fear that I'll find out that I am doing it all wrong.

But I was browsing in Barnes and Noble a few weeks ago (yes, people still browse for books in a bookstore!  It still happens!  Please save our brick and mortar stores!) and I stumbled upon HOW TO WRITE IRRESISTIBLE KIDLIT by Mary Kole.  Mary Kole is a literary agent who runs a blog called kidlit.com which I enjoy reading.  I remember when her book came out, thinking that I might check it out, but I was a little scared--what if I found out that my method for writing children's literature is all messed up?  (Okay, really I am not this insecure about my writing all the time, but I have my weak moments.  And right now, I can't afford weak moments.  Weak moments usually involve a pity party with some form of chocolate, or maybe french fries, and walking around my house in a my-writing-stinks funk.  I am beginning some new projects and funks can kill a project dead.  Like BANG! POW! YOU ARE DEAD, NEW PROJECT!)

So, with trepidation, I put down my bag, sat on the Barnes and Noble carpet, and cracked open Mary's book to give it a test run.

Three pages in (and a quick thumb-through), I stood up, picked up my bag, and shelled out the $19.99 cover price.  (Yes, I probably could have ordered it on-line and saved some money, but I had to have it right THEN!  Also, see above^ Save our brick and mortar stores!)

I don't want to tell you too much about her approach, for I think you need to read it for yourself, but I will tell you that she does two things that I really, really liked:

1.  She gives the opinions of other editors and agents about what they find compelling in children's literature.

2.  She gives examples from real, actual children's books which reinforce what she is talking about.

I think this is a great book for writers who are just now discovering the desire to write for children as well as folks like me, who have written for kids for YEARS, but want to examine their own methods and delve deeper into their craft.