The Week That Ate Me

So, I was chugging along with my NaNo, slowly of course, but at a steady pace, and faithfully writing down my one picture book idea a day when THIS WEEK HIT.

And everything went kerplunk.  Or kaput.  Or something like that.  At this point, I don't even know.

What was it about this week that killed me?  I am not sure, but somewhere about last Tuesday, the fatigue I had been fighting off since September came crashing down.  I was falling asleep in my supper (which was unusually late each night, even for us) and something had to give.

So I gave myself a few days off from writing, thinking I would hit it hard again when the weekend came.  But when my fog lifted this morning and I got a good look at my house, well, there was stuff I had to do or else.  It rained so there was dog-tracked mud, and the dog hair, dear lord, THE DOG HAIR!!

But now that things are better, I am not sure what to do.  I think I will let my NaNo simmer for a few days more before I go back to it.  There is something not quite right--the narration seems tentative.  This will not do.  However, I am rarely a quick problem solver.  I need time to hear the voice again and capture it in the right way. I think what it getting me is that I love the idea so much I am afraid I will mess it up with the writing of it, and as I go back and read it, I get a sense of that fear.

This story needs to be fearless.

That's the lovely thing about writing, it always keeps you guessing.  Once you think you know what you are doing, guess what?  You don't.


That is a long title, although Fred's story is sadly much shorter.  As a young man in 1917, Fred had asked Sina Juanita Angerman, a girl he had courted for several years, to be his wife.  Fred had been playing baseball in Arizona and Juanita moved there to be with him after their wedding in August.  However, in October of 1917, Fred was drafted into the Army and sent to Kansas.  Juanita went with him to his training in Kansas, where he was able to see her on weekends.

Juanita found out she was pregnant and moved back to her home in Oklahoma to have the support of her family.  Fred had planned to take a few furlough days upon the birth of his child, but that was not to be.  Instead, two days after his daughter, Mona Katherine, was born in May of 1918, Fred was shipped out to France.

What followed were a series of beautiful letters, from Fred Lee to his wife and daughter, some with the location censored altogether, some that just said, "France." Fred Lee could not tell his wife or daughter that he was stationed on the front lines of the battle, at St. Mihiel, and later at Meuse Argonne.

On November 1, a major offensive had been planned, to commence at 5:30 a.m.  Though the fog provided excellent cover, "Sergeant Lee was wounded with a German Artillery shell in one leg just above his ankle at about 6:00 a.m., November 1, 1918."

Fred sent one more letter to his wife and daughter on November 9th, but Juanita did not receive it until much later.  In it, he said he was in "Base Hospital 77.  Am feeling better today. Will be out in a few days."

The next communication regarding her husband Juanita received was not a letter.  It was a telegram.

Fred Lee never got to see his daughter, Mona Katherine, who also happens to be my grandmother.

Armistice Day is celebrated every year on  11 November to commemorate the armistice signed between the Allies of World War I and Germany at Compiegne, France, for the cessation of hostilities on the Western Front of World War I, which took effect at eleven o'clock in the morning--the "eleventh hour of the eleventh day of the eleventh month" of 1918.

Roughly 20 million people died in that war, including my great-grandfather. I think of him every Veteran's Day, the good-natured, twenty-four year old young man who never met his child.  And of my great-grandmother, who not only raised her daughter alone, but went on to have a career as a teacher and a principal, later traveling the world to see the places she and Fred had dreamed of seeing together.


Thinking of all veterans today.  Your sacrifice is deeply felt. 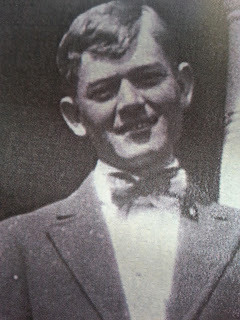 So, although I have not officially signed up (because I am official enough in my "real" life that I try very hard to be unofficial in all other aspects) I am participating in NaNoWriMo for the first time in...forever.  Maybe.  I can't remember the last time I did it.  November has traditionally been a very hard month for me.  In the past, when my daughters competed in Irish Dance, the competition which qualified them for the World Championships was always in November. It included travel and lost of driving to practices, lots of "team mom" responsibilities, etc.

Thus, in the past November was mostly about survival. (If you are a dance mom or a team mom, you know what I am talking about.  If you are not, well, count yourself lucky!)

True, I would occasionally work on revisions, or attempt to finish something I'd already started, but I've never been a full-on participant.

But that is not enough.  No.  I am doing PiBoIdMo, too.  (I must come up with one Picture Book Idea each day this Month.)

(That's where the jumping in cold water metaphor comes in--even though I know it is crazy to commit to TWO month long writing projects--I am doing it because if you don't jump into the crazy cold water sometimes, you will find that the pool (or lake or whatever) has frozen over and you have to dig through the ice just to get there.  Ice digging is hard work.  Far better to just suck it up, hold your breath and cannonball in.)

Now, to be honest, I don't expect that I will finish my novel.  But if I can get about 30k over the span of a month, I'll feel pretty good about it.

And as for the picture book ideas, I might just end up with 60!!

Any other fellow NaNo-ers out there?  PiBoIdMo-ers?