The Legend of Sleepy Elf 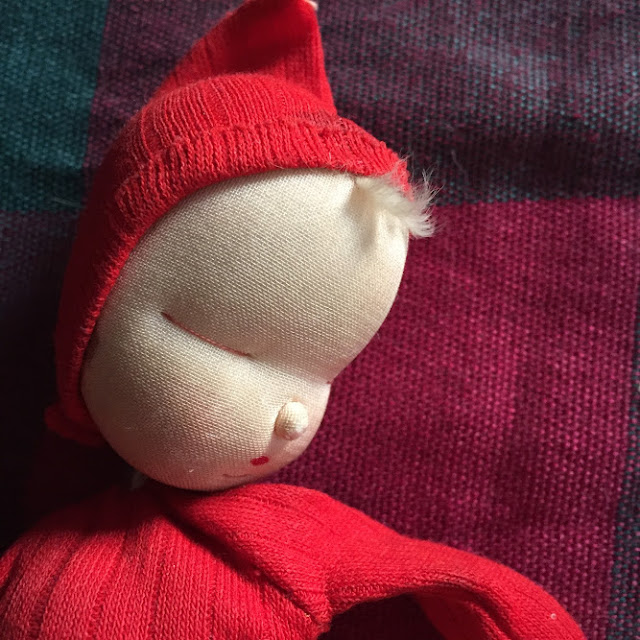 When I was little, one of the thrills of Christmas was decorating the tree. What I loved absolutely best of all was unwrapping each of the decorations, cradling them in my hands, and recalling (or inventing) a story about them. There were the tiny-china-angel-bell and the tiny-china-snowman-with-the-top-hat bell who were best friends. Of course, there were the trinity of fairy angels with their gossamer skirts and netted wings who resided in heaven, which could only be reached by climbing to the very top of the Christmas tree.

And then there was Sleepy Elf.

My sister and I loved Sleepy Elf. LOVED HIM. My little brother probably would have too, if we ever let him hold him. But we were too busy fighting over Sleepy Elf ourselves to ever let him out of our own hands.

So yes, he became a little bit worse for wear over the years

And his head began to flop over to the side in a not-very-alive sort of way.

When I moved out, I'd always look forward to finding where my mom had chosen to place Sleepy Elf. Personally, I always liked him under the tree, but he found his way into baskets and onto mantles from time to time. When I brought my children to Nana's for the holidays, the first thing they did was search for Sleepy Elf.

And then I moved with my little family to California. The only time we saw Sleepy Elf now was occasionally in the background of Christmas pictures from home.

This year at Thanksgiving, my family traveled back to New Mexico to visit my folks. My mom had decided to pass on many of her Christmas things to her children and grandchildren, so she set up a room displaying all of the ornaments that were looking for new homes. Tiny-china-angel-bell and tiny-china-snowman both found a new home with my daughter Cali.

Sleepy Elf lay there on the table, My daughters nearly squealed (and they are mostly grown up) "Mom! You have to get Sleepy Elf ."

But I had already decided that my gift to my sister would be to let her have him. Maybe I would devise some sort of game and let her win him. Or maybe I'd just claim to be the bigger person (which I was being--haha) and let her have him. We had both loved him so much as children, but I would be willing to be satisfied with my memories.

She was touched. She cradled Sleepy Elf in her hands the way she cradles so many new lives when she brings them into the world as a midwife. Yes, Sleepy Elf was going to a good place.

Imagine my surprise when I opened my Christmas package from my sister and there, wrapped in a Christmas napkin, was Sleepy Elf. No note--because there was nothing to say. I had given him to her, and she now gave him back to me.

That's how it is with love.