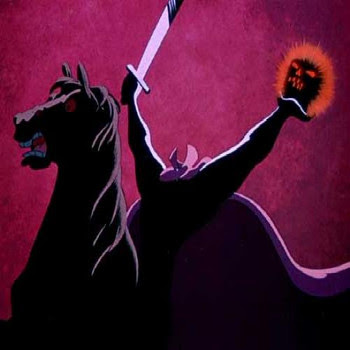 When I was little, the Halloween story that scared me the most was The Legend of Sleepy Hollow by Washington Irving.
I could not handle this story for some reason, which is probably why is has become my favorite ghost story to tell at this time of year.
My next door neighbor had a record (those were little black, round things that played songs and such when you struck them with a needle.....think of them as prehistoric CD's) with the story of the Headless Horseman on one side and a goofy little song on the other. Whenever my friend played it, I had to go home. I just couldn't hear it and not have it play in my brain, over and over again at bedtime.
Tooooooo Scary.
And then, when I was in middle school, I went to a Haunted House (something I HATE TO DO) that was hosted by the National Labs where my dad worked. Yeah, Scientists put it on. I am going out on a limb here, but let me just say that it is my opinion that Scientists should NEVER be allowed to create Haunted Houses for Little Kids. Never.
Naturally, it was terrifying. There were rooms for each scary thing....a Frankenstein room (with those electrode things zapping across the room as if they were being hit by lightening....nice job, Scientists), a vampire room, a wolfman room (the werewolf actually chased us into the next room, some mad Scientist/human experiment room that I still can't think about (yeah, nice going, Scientists!)
But I survived them all, because I was the ONE kid out of hundreds that made their dad go inside, too.
But then, in the parking lot, as my dad dropped his car keys and was fumbling around on the ground for them, I heard the distinctive clip-clopping that could only be horse hooves. I was afraid to turn around, but somehow I did anyway.
And there he was. Clip-clopping his way across the parking lot on a black horse, black cape, no head, carrying a jack-o-lantern carved into a hideous smile. The Headless Horseman.
Yeah, nice going, Scientists. It's not enough that you scare the pants of little children INSIDE the Haunted House, you have the keep the fun going on the OUTSIDE. (and we were the only ones in the parking lot because I wanted to leave early....all the other kids were still inside having, err, um, FUN I guess you would call it.)
I probably didn't sleep well for months....maybe years.
So now, each year, I treat my fifth graders to a retelling of the classic tale. I mean, there are those things which you just HAVE to pass on to the next generation.....
clip-clop
clip-clop
clip-clop
hrh
what's your favorite scary story?
Posted by storyqueen at 9:06 AM

bwa-ha-ha-ha--you know how to keep the tradition ALIVE!
Those are some truly scary memories you've shared. I, too, was terrified of the Headless Horseman.
My mother's family thought scaring kids was expected. One year, my friends and I had to walk through real woods in the dark where the adults had hidden and then leaped out at us. The object of this game was for the winning kid to make it back with salt still clutched in his/her hand and a mouthful of cider!
When I was deemed too old to trick-or-treat, I dressed as a horrifying witch and sat completely still on a dark porch (just pumpkin light). When the kids reached for the cauldron filled with candy, I cackled. The next summer I heard some kids passing our house and one said, "That's where the witch lives." Oh, I'm bad.

What a great story! Got me laughing out loud. I was never too afraid of Haunted Houses, but I was terrified of ghost stories. Strange maybe, but I guess it says something about me that whatever I conjure in my imagination is worse than anything I encounter in real life.

I still get goosebumps thinking about "Thump...Drag.."

Great story, Shelley! I was terrified of that story and haunted houses too. I'm scared of corn fields (not so good living in Iowa) after seeing Children of the Corn when I was 13...

The Legend of Sleepy Hollow was the scariest, but Poe wrote some pretty great ones too. Happy Halloween!

Oh my goodness, loved your story! I'm the same way about scary, creepy stuff like that ... and, it appears, my daughter has taken up that tradition ... she wouldn't even go get candy from the houses that freaked her out too much.

That is too funny! It makes for some powerful childhood memories, though. I always loved the story of The Headless Horseman - maybe I'm just a bit twisted! :-)

That's a great story. That would have terrified me too as a kid. Not sure what my scaries tale is - probably ones that are based on true stories.

Oh, I cannot handle haunted houses. They are too scary for me. My husband read Irving's The Legend Of Sleepy Hollow to our children this year. I loved it. The writing was so good.

I do not like to be scared. At all. I don't watch scary movies, or read scary stories. The Legend of Sleepy Hollow did terrify me. At least I'm in good company.

I was a camp counselor, so I have all sorts of horrid hookman stories to keep me up at night. Shiver...